Welcome to Picture Hanging 101!  My Friend Teresa Studios has new affiliation with a professional picture, mirror and artwork hanger, Scott Smith.  We’ve put together this five-part blog to help you, the enthusiastic but timid homeowner, gain the knowledge and confidence to hang pictures.  The five parts are:

Part 2: How to Hang a Single Picture

Part 3: How to Hang a Picture Grouping

Ready to hang a picture?  If you’re reading this, then you probably want to do a little more than pick a spot on a wall and drive a nail, but you’re a little hesitant about doing it right.

I’ve been hanging pictures professionally since 2014 and have a few opinions on what works best for different situations.  I’ve written this blog to simplify the picture hanging process and have divided it into six parts to make it more bite-sized.

(A little housekeeping here… I’m calling the hardware on the back of your picture a ‘hanger’ and the hardware attached to the wall is a ‘hook’.)

If you’re looking to hang just one picture, you may not need to read beyond Part 2 – but if you’re hanging a grouping, are interested in a modern twist on an old picture hanging technique, or want to learn more about lighting your pictures then check out parts 3, 4, and 5.

OK, enough introductions.  Where do you start?

Look at the back of your picture.  You’ll probably see one of these four hangers on the back: 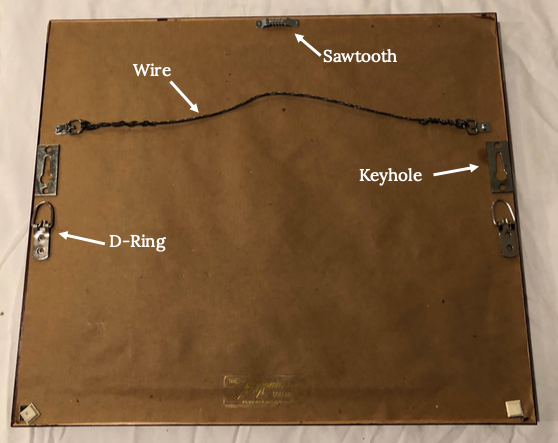 A wire.   It is a time-tested method, but the picture may lean forward if the wire is mounted too low.  And good luck if you are trying to hang two or more pictures side-by-side.

A sawtooth.  A sawtooth is a small bracket with a zig-zag edge mounted at the top of the picture.  It’s usually on lightweight pictures.  They are easier to work with than wires, but you can’t use a typical picture hook with them (more on this below.)

D-Rings. These are D-shaped rings mounted on the left and right of the picture frame.  Hanging a picture with D-rings can be tricky because you need to use two hooks that are level and spaced properly.  D-rings are also used with wire, but unless your picture comes with wire the D-rings are meant to be used as-is.  Stringing wire between them will likely warp the frame.

Keyholes.  A keyhole is a hole and slot mounted on the left and right of the picture frame.  The head of a nail or screw goes into the hole.  The keyhole may be a metal plate or may be drilled into the frame.  Like D-rings, you’ll need two hooks that are level and spaced properly.

For some lighter-weight pictures with an open back, such as a canvas, there may no hangers.  That’s OK; it’s easier than having any of the other hangers.

Now that you know what you have, what is the best type of hook? Let’s go on a trip to the hardware store.

If you take a trip to your local home improvement store, you’ll be faced with a wall full of options.  Your first thought may be ‘to heck with it, I’m going to use a nail just like dear old Dad used to do!”  Although that IS an option, it’s not be the best one.

Here is a display of picture hanging hardware at one of the two largest hardware stores:

Overwhelming, isn’t it?  Well, half of the stuff on these displays are hangers, and you should already have a hanger on the picture (see above).

That means the rest of the stuff are hooks (and a few specialized items we won’t worry about). Here’s what you’ll see: 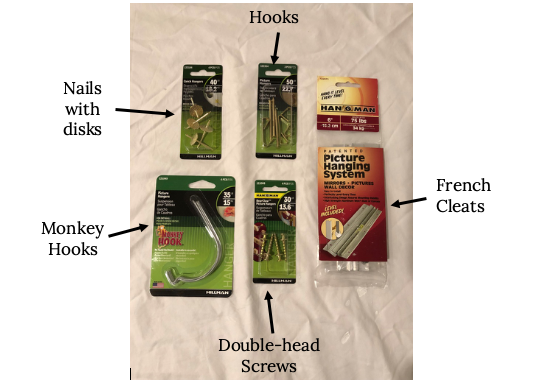 SO… What should you use?

Here’s an illustration of what plays nice with what.  Green lines mean the hook works well with the hanger; yellow means it’s ok, but not the best; and red means these are not a good pairing. 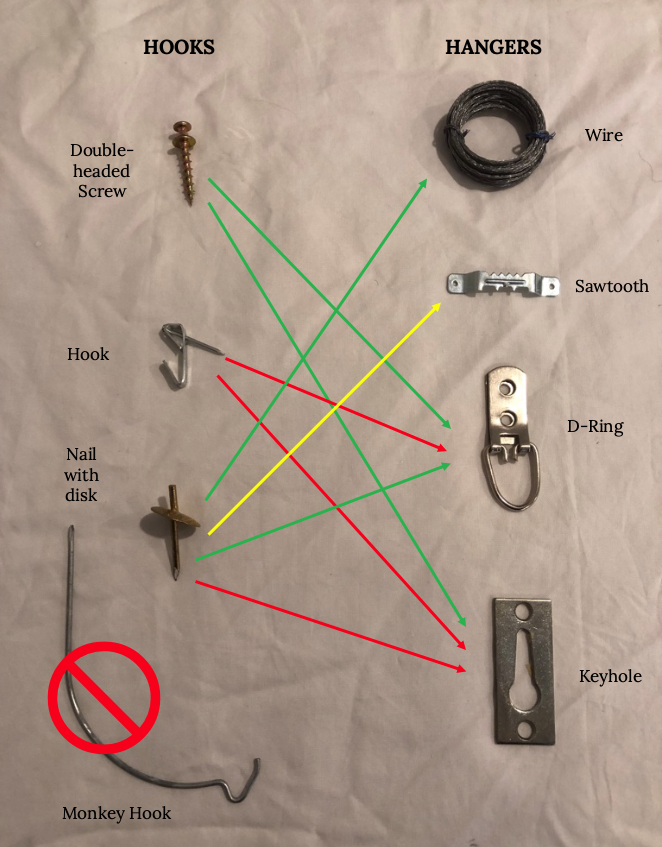 Hooks are what most people think of when they think of a picture hook.  They come in different sizes and can hold from 10-100 pounds.  They are nailed to the wall, and the hook is designed so the nail is set at the proper angle.

Nails with Disks, also called One-step Hangers by one manufacturer, are an improvement over regular nails.  They are nails with a disk attached ~1/3 of the way down the shaft. The disk serves two purposes:  It keeps the nail from going into the wall, and it guides you on the correct angle.  These come in different sizes and can support from 10 to 60 pounds.

Push-Throughs, or Monkey Hooks, are the ‘no tools’ type picture hangers.  It is a curved wire; one end has a hook and the other has a point.  You drive the pointed end into the wall leaving only the hook showing.

OK, now that I’ve discussed all of the ‘usual suspects’ for hanging pictures, it’s time for my two favorites: Double-Head Screws and French Cleats.

Double-Head Screws are screws that go directly into drywall.  They have two ‘heads’ – the first one stops the screw from going further into the wall, like any screw head does.  However, there is a second head that is ~1/8” beyond the first; take a look at the photo to see what I mean.  These screws, called ‘Bear Claw 4-in-1’ by one manufacturer, can hold up to 100 pounds. 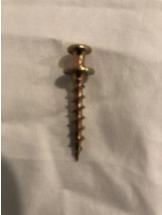 The only disadvantage is because they are screws, they will leave a larger hole than a nail would – but it’s easily plugged with spackling, and it’s a small price to pay for its universal use.

French cleats are a bit different than other types of picture hanging hooks and hardware.  They are a pair of moulding or metal brackets; one goes on the wall and the other goes on the picture frame.  The 45-degree lip on the picture cleat interlocks with the wall cleat. 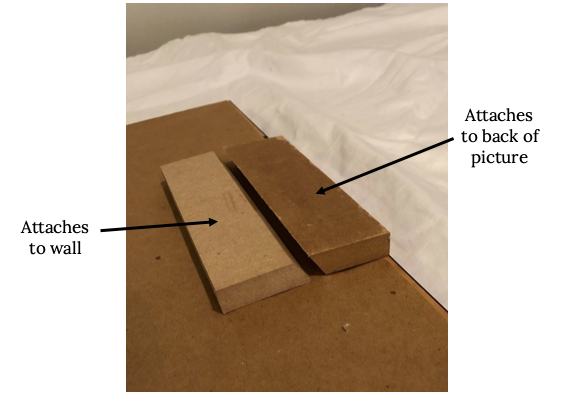 Here are a couple of caveats.  French cleats will replace whatever hardware has been installed on the picture frame, and they must be level on both the wall and the picture frame; there is no chance for adjustment later.

Use French cleats with:

Now you know all you need to know about hangers and hooks. Time to go to Part 3, where we’ll talk about the most fearsome part of the process – putting the hook on the wall!