Fear Makes You Great – 10 Years as a Photographer

When I briefly worked for a real estate agent, Jane, after college as her Client Care Manager I got my first taste of feeling like running a business was an achievable goal.  She was a #girlboss before they ever put that on a coffee mug who was as sweet as honeysuckle but would surreptitiously sting you like a pile of red ants if she had to.  She was beautiful, charismatic, and occasionally would go on a monologue so long she’d run out of breath mid-sentence.  We affectionately still call that the “OK, Jane” in our house.  We have since lost Jane to cancer, but my oh my how I admire her.

When I worked with Jane I had the gnawing feeling that I could do a lot more than I was trusted with.  I chased my purpose in church, in grad school, and at a new job at Duke University that was going no where.  At Duke I found I was training my boss how to do her job, doing it for her, taking the fall for her mistakes, and watching her collect much more generous pay checks than I would ever see.  It’s a horrible feeling that too many people can relate to.

Breakthroughs come in unexpected places . . . like. . . on a cruise to Alaska.  I spent more time on that cruise gawking at a friend’s camera then I did the calving icebergs.  By the end of the trip I was like those huge chunks of ice falling in to the ocean; I was moving in a new direction.

I got my first camera for Christmas that year and didn’t have a clue what I was doing.  Within a few months I was asking friends to let me photograph their families for practice and for ‘fun’.  Within six months people were saying “you should call ‘my friend Teresa'” and, well, the name stuck.  I became a professional photographer by accident.

I remember a few things about those first few years but mostly the fear.

Not knowing if I’d have “something good” from a session.
Meeting ‘real’ photographers and them thinking I was a total fraud.
Not knowing what to charge or being too expensive
Calling the Small Business Association to figure out forms.
Not knowing how to pose people and feeling caught on the spot.
Of ruining someone’s wedding day.
Asking for help and admitting I was lost
Standing up to clients who insisted on a discount

Speaking of discounts.  I remember one particularly upsetting exchange early on.  In one of my first in-person sales meetings with a client (which is its own special kind of terrifying when you’re new) the dad sat across from me and told me: he would never pay ‘that much’ for digital files, that he could have photographs from his entire cruise vacation for that price, that if he had a nice camera he could have taken those photographs.  He was rude and dismissive.  He threw his arms in the air, he scoffed and snorted, he walked in and out of the room ranting.  He belittled me and made me feel small.  It worked. I was scared to stand up for myself.  I was scared everything he was saying might be right.  I was intimidated and insecure.  Through his eyes I saw my photographs and realized that they were all crap.  They were all terrible.  They were valueless and trite.  I was awful and unqualified.  I was so upset I couldn’t think of anything to say in response.

Sensing my trepidation he swooped in to negotiate – how about $300, not a penny more (they were $750 at the time).  “You can walk out of here with $300 or you can walk out of here with nothing, that is your choice.”  My anxiety was pounding and blocking out all rational thought but deep down, in the tiny sliver of ‘not scared’ I had left in me, I realized he was manipulating me.  He wanted what I had.  My work had value.  This was a test.

With every ounce of assertiveness I could muster I stood up, packed up my giant bag of samples, picked my proofs up off his dining room table and said that he could call me if he changed his mind.  He stormed off in a way that made me glad he was gone and scared he would be back . His wife looked uncomfortable and trapped.  The daughter was nearly in tears.  I really, really, really wanted to compromise and just take the money and run, especially seeing how upset the mom and daughter were.  I left scared and disappointed, but I left holding my ground, and didn’t expect to hear from them ever again. 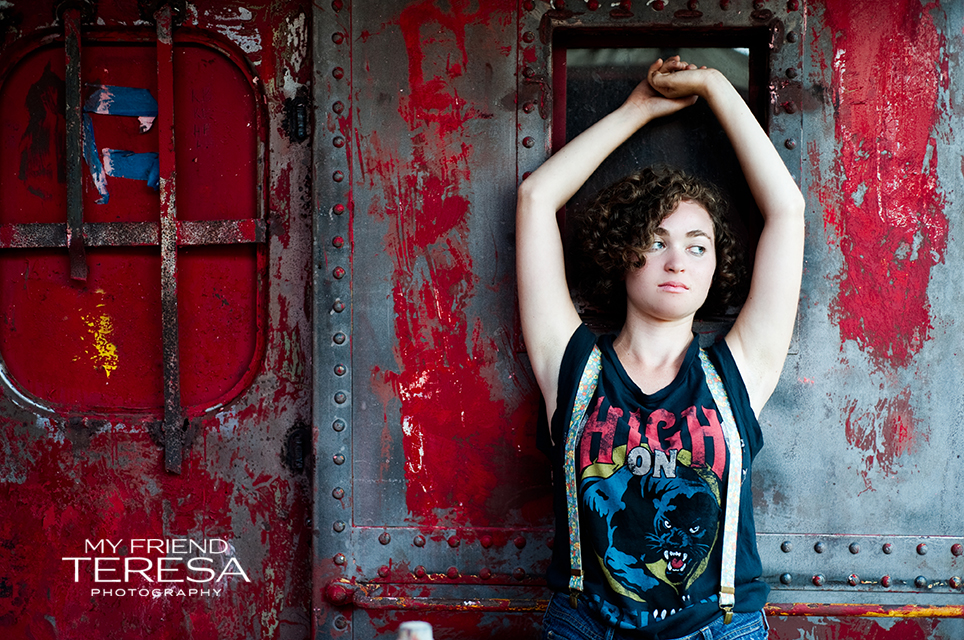 (This is NOT the daughter’s session with the grumpy dad, this is the awesome Meredith who I photographed around that same time)

I was a few miles from their house at a gas station when my phone rang.  I let it go to voicemail.  I still have the message saved nearly 6 years later.  “Hi, um, Teresa, this is ___wife____ I just talked to ___husband___ and he said to come back and he’s not happy but we can pay the $750″ for the digital files.”  I went back to their house and collected my check from the wife, the husband would never be seen again.

Fear will propel you out of things you never want to experience again.  It will force you to make yourself better, your communication better, your business or product better.  Like tempered metal, you are stronger BECAUSE of the fire, not in spite of it.

Its 10 years later and I still think about Jane.  I think about how scared she must have been – to work at a time when mother’s really didn’t, to go in to stranger’s homes and make the case for her commission, to face off with other agents in the best interest of her clients and herself.  To face cancer and keep working, to be great because she never let the fear stop her.

We’re all just one mistake away from feeling like quitting completely.  Don’t be scared.  Business doesn’t require perfection – it requires pushing through the hard stuff, facing your weaknesses, and doing it anyway.  We are all capable of more than we are trusted with.  Don’t let your fear keep you from being great.